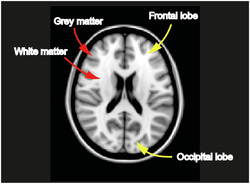 An Acquired Brain Injury (ABI) is an injury caused to the brain since birth. There are many possible causes, including a fall, a road accident, tumour and stroke.

Did you know...?
- There are 1 million people in the UK living with the effects of a brain injury
- More people are admitted into hospital with a brain injury than with a heart attack every year
- Half of all traumatic brain injuries happen in people of working age (20-65 years old)

This is a picture of a brain taken by a type of scan known as MRI (magnetic resonance imaging). You are looking at it from the top, as though someone has sliced horizontally across the head.


You can see that the brain appears to have a darker outside layer and a lighter inner layer. The brain is made up of millions and millions of neurons. These neurons have a cell body, which produces signals, and axons, which carry this signal to other areas of the brain. The darker layer ("grey matter" or "cortex") is composed of cell bodies and the lighter layer ("white matter") is made up of the axons. Brain injury can cause damage to either the grey matter, white matter or both.

The brain can become injured in many different ways.

A Traumatic Brain Injury (TBI) occurs when the brain or head is subjected to an external force e.g. sudden deceleration during a road traffic collision, hitting or being hit by a hard object during a fall, a penetration injury from a bullet.

The damage to the brain happens at the instant of the injury but can also be made worse by subsequent events. For example, if someone loses a lot of blood during a traffic collision, their blood pressure may become too low ("hypotension") to send enough blood to the brain and this injures the brain more. Many things can cause this type of secondary injury e.g. low oxygen ("hypoxia"), low blood sugar ("hypoglycaemia").


The Headway website also has leaflets with information on how the brain works and the effects of injury.